You might have noticed that things have gone a bit quiet around here lately. There’s a reason for that, beyond the usual too-busy-to-write arguments, and I think it’s finally time to come clean.

Ok, no, not really. What’s really happened is that I’ve joined with some other folks to form a new game studio in Edinburgh, Blazing Griffin. Our first game, right off the bat, is Distant Star — but not the Distant Star you know right now. We’ve been working with an extremely talented designer (I can’t name names, but he’s built a couple of highly prestigious AAA games in the last few years, which were published by Valve and Ubisoft) to re-balance the game and add a bunch of cool new mechanics. This, of course, is the great re-balance effort that I’ve referred to recently. We’re also working with an artist to see if we can’t improve on the programmer-art UI. Our intention is to keep the low-fi, retro aesthetic but try to clean it up so it doesn’t look like so much programmer art.

So, what else is going to change for Distant Star? Right now the biggest change is that I’ll be shutting down expatgames.net and re-redirecting it to blazinggriffin.com. My posts on Distant Star and development in general will be going up there instead, alongside posts from our other members on the trials, tribulations, and general business of starting an indie game studio in Scotland. See you there!

A lot of game designers talk about the importance of getting players into what’s called a “flow state” — the mental state where you’re completely engaged and the interface between you and the game disappears. For most games getting into flow is (relatively) easy and usually reflects a certain acquired skill; when you’re on a kill streak in a first-person shooter or macroing perfectly in a real-time strategy game, you’re almost certainly in a perfect flow state. For turn-based strategy the situation is a bit different: how can you get into a flow state in games which are inherently slow-paced?

One way, of course, is to just make turns go really, really fast. A standard chess match more-or-less requires players to enter a kind of anti-flow state in which every move is slowly, meticulously considered; add a time element, as in blitz chess, and the game suddenly becomes about reflexes and speed rather than deliberation. Serious blitz chess matches basically require both players to keep a sustained flow state for the entire match.

Of course, it’s not as easy as imposing a time limit on turns — anyone who’s tried to play blitz chess over the internet has probably noticed that achieving that critical flow state is much, much harder. I’d argue that the interface for playing chess on a computer is terrible, at least compared to the interface for playing chess in real life. Part of what makes enables you to reach a flow state in a game, be it Call of Duty or Go, is minimising the amount of brainpower you have to waste actually executing a plan. In general, flow is about reaching a point where you don’t have to explicitly think about the game; you simply act.

It seems obvious to me that part of what keeps us from achieving a flow state in slow-form strategy games are the clunky, information-heavy interfaces we usually use. There’s only so much you can do with a mouse and keyboard, of course — but bring proper touch controls into the mix and I suspect we can really start to change things. Don’t think, don’t plan, don’t hunt for Shift-W — just reach out and tap the damn thing.

Right now I’m working on streamlining the UI in Distant Star. Partly this means optimising all of the in-game screens so that touch controls work like you’d expect, but partly it means finding places where I’m giving the player too much information and changing what gets displayed. The system for ship stats, for instance, is needlessly complex: tracking, damage, speed, armor, shields, recharge…it’s far too much information to process quickly. The interface for selecting fleets and issuing move orders is, I think, one of the few places in the game right now where it’s possible to get into something like a flow state — moving fleets is intuitive (I hope!) enough that you just don’t have to think much about it.

Note to self: more of that, please.

The final version of what will become Distant Star 1.7 is finally starting to take shape. The biggest change this time around is probably (bear with me!) the removal of the Cephala and Apparat races — so many aspects of the game have been transformed so completely that rebuilding and rebalancing one race (Humans) is just about all I can handle at the moment. 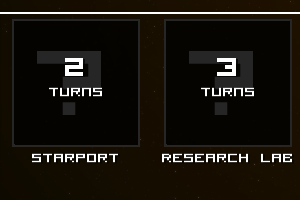 That said, there’s a metric ton of completely new or totally redesigned features coming in this release, including: 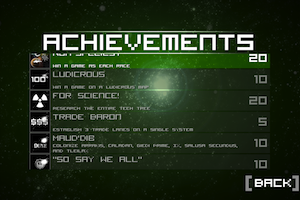 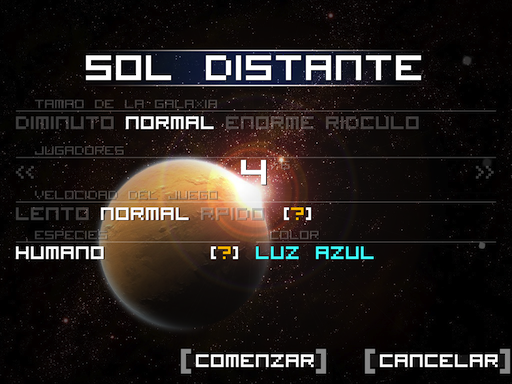 After much wailing and gnashing of teeth, I’ve started in on the (not-insignificant) task of localising Distant Star for languages other than English. It’s not exactly a thrilling task, but a guy can’t have fun and games all the time. So yeah: Distant Star, llegar pronto!

Of course, the Great Research Rebalance is still happening; more news on that front (progress!) soon.