A week ago I announced my entry for PoV's October Challenge, an old-school 4X space game (ala Master of Orion) for the iPad called Distant Star. I've made a fair amount of progress since that announcement; Distant Star has gone from a pile of half-finished tech and ideas to a rough playable prototype. Almost all the core features are in place: ship construction, exploration, colonization, combat. Of course, to be properly playable I needed a few basic AIs -- at the moment, you can play against two simple, deterministic AI players, each with their own play style (one colonizes recklessly, while the other builds up small fleets and attempts to capture one system at a time).

Introducing some simple AI players helped point out all kinds of multiplayer bugs I'd introduced so far -- turns out none of my fog of war code worked at all, and resource accumulation was completely borked. The first game I played the AI wiped me out almost instantly. 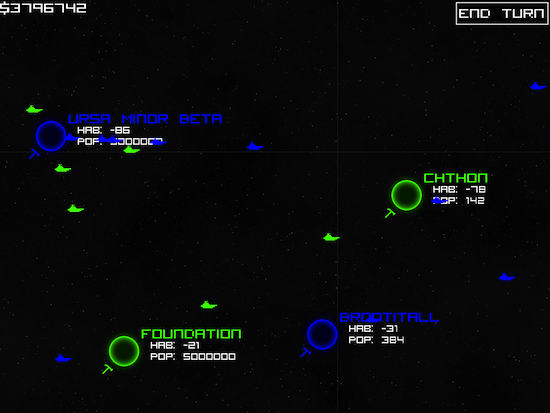 Based on some early, vicious usability feedback I've made some subtle changes to the map interaction, restricting scrolling outside of the galaxy and highlighting fleets or systems when they were selected. I also played around with a real-time version of the game, but quickly realized that, while it made the early game much more pleasant, things got way too hectic once the AI acquired more than a handful of high-quality planets. They started building ships far faster than the player, especially if the player's empire was quite spread out. Back to turn-based I went. 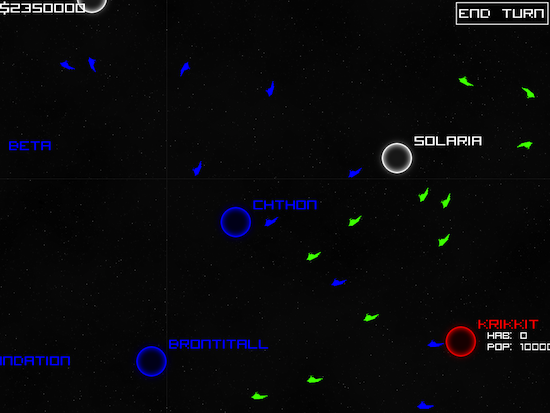 Up next: research management. Bring on the tech tree!