I just released the 1.3 update to Distant Star to Apple. The big thing in this update, of course, is the re-worked tutorial & help system — but if you’re an old hand at the game (and, by now, there’s quite a few of those!) you won’t be disappointed, either. 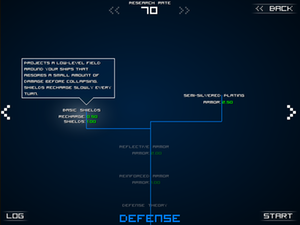 In addition to the tutorial goodness, 1.3 brings another new race, the mechanical Apparat. The Apparat are a robotic race, which is reflected in their available ship types; they start the game with much of the Industry tech tree already researched, making them a formidable foe early on. Unfortunately, being robots they’re not terribly creative — so they’re slower to research new technologies than the other races; on the upside, they don’t need to breath, giving them an easier time when terraforming systems.

The research screen functions a little differently, too. Instead of tapping a technology to start researching it, now tapping merely selects, displaying a tooltip with more information about the selected technology. There’s a [Start] button down in the bottom right, which I think makes a little more sense.

Damaged ships now repair (slowly!) while in orbit over friendly systems; you can speed up the repair rate by researching in the Industry tree. Oh, and armor/shield status is displayed in the Fleet Management screen, so you can check to see which ships are healthy and which are in need of repair without having to throw your ships into combat. I’ve also polished several of the textures used throughout the game; it’s not much, but the whole thing should look a little shinier, somehow.